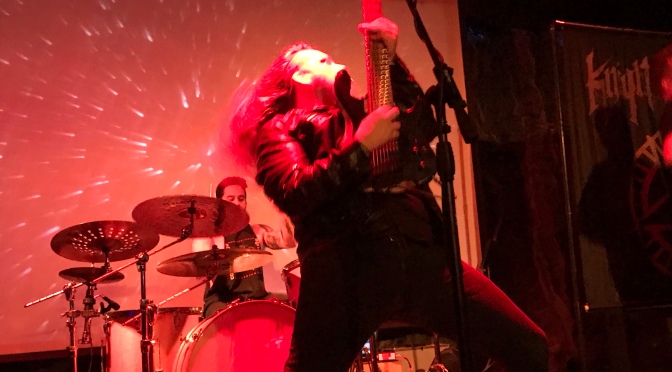 The event was an ode to the popular Final Fantasy series, with The Returners, metal band Knight of the Round, rapper Mega Ran and rock band Descendants of Erdrick performing music related to the beloved series.

It was the third time Ongaku hosted a video game concert, following Mega Man- and Legend of Zelda-themed shows.

The storyline in a video game is often propped up as the major driver but a good soundtrack can make a difference, too, Liebowitz said.

“You can take a mediocre story and put good music behind it and make someone cry,” said Liebowitz, shortly after completing a 45-minute set that included a medley of Final Fantasy VI songs.

Knight of the Round founder Justin Taylor, who named the band after the most powerful summon in Final Fantasy, said focusing on video game music often means an instant and deep connection with the crowd.

“You see a different sort of passion from the crowd,” he said. “It’s a little bit more special. It strikes a different chord with them.”

The concert was the centerpiece but those who attended could also sample three specialty cocktails mixed up just for the event: Cactuar Juice, Materia or Phoenix Down.

In addition, a speed-art competition with a Final Fantasy theme gave two participants 30 minutes to come up with art themed around Final Fantasy.

They were elements that aimed to create a complete immersion into the series for the hundreds in attendance.

“It makes us realize that what we do matters,” Mega Ran said of the crowd.

Mega Ran on his rap career

As the Descendants of Erdrick played their hard-driving set to close the show, those in the crowd banged their heads and pumped their fists.

Bassist Thad Stevens said it’s an illustration of the passion they have for games.

3 thoughts on “‘Nerdcore’ concert in Orlando a Final Fantasy homage”