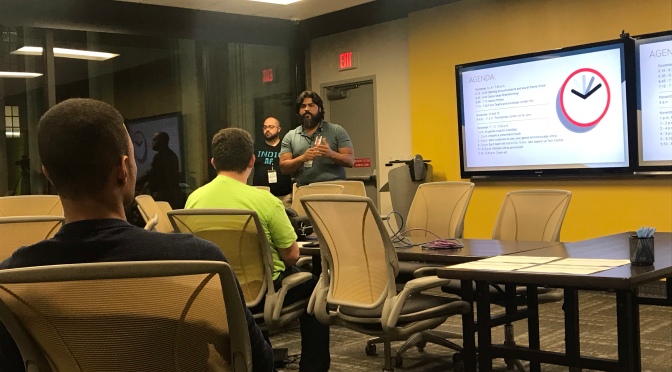 The Orange County Library System on Thursday hosted the opening of its first-ever video game jam, as roughly 15 local gamers and developers opened the four-day event.

The group will spend the weekend through Sunday morning building a video game from scratch at the library’s high-tech downtown Orlando Melrose Center.

Melrose Center’s Juan Rivera said he launched the game jam after attending others in the city, including one hosted by the independent video game group Indienomicon.

“The idea of everybody working together to make a game within 48 hours, that builds the community,” he said.

Overall, six games were pitched on Thursday, with those in attendance splitting into teams that will work on them throughout the weekend.

On Sunday, the public will have a chance to playtest the titles, which include 2D side scrolling platformers, a memory-sequence game and an arcade-like action game.

Rivera said the idea was to find a way to showcase the resources available athletic the Melrose Center.

Then he attended a game jam hosted by Indienomicon.

“I wanted to share this space with everybody,” said Rivera, who got the idea from an Indienomicon jam.

Indienomicon’s Chad Hoover was at the event to help Rivera kick it off.

“As a community, we have been trying to figure out ways to keep our people here,” said Chad Hoover of Indienomicon. “People are our biggest export. These events can put a professional with someone younger.”

UCF student Aaron Hobgood, 21, said he wanted to attend the game jam to be as hands-on with game-building as possible.

“I love games,” said Hobgood, who has taken some game dev classes at UCF. “I want the real-world experience of actually building something.”

“It’s not often that you can make something that other people will enjoy,,” Hobgood said.